You are here: Home › About Bavaria › Highlights & Culture

From typical delicacies and local customs to world-class festivals and breathtaking places: Bavaria is a beloved tourism destination and boasts something for just about anyone!

“Live and let live” is the motto of Bavarian conviviality. The variations in cultures and dialects between Bavaria’s seven administrative districts give each region in Bavaria an individual charm entirely of its own. And those cultures and traditions are preserved in traditional foods, customs, clubs and events all year round. Festivities are just as much a part of day-to-day Bavarian culture as is the traditional food featuring one-of-a-kind regional specialties.

Traditions - a feature of modernity 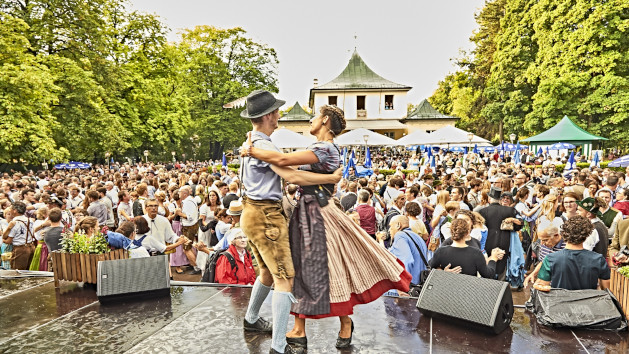 The Servants' Ball in Munich
For early birds and insomniacs 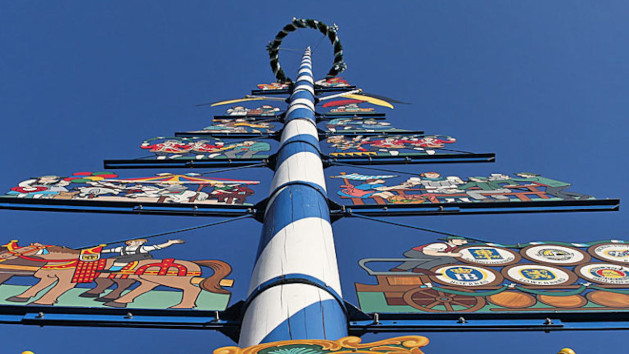 The May Pole
Celtic tradition in Bavaria 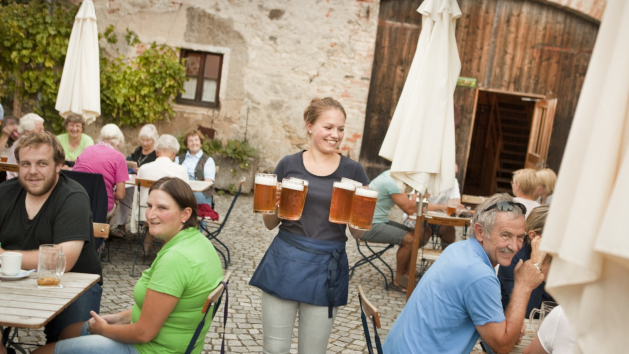 The beer garden
Bring your own food! 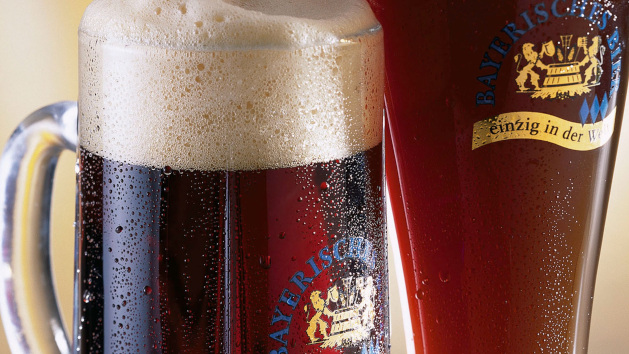 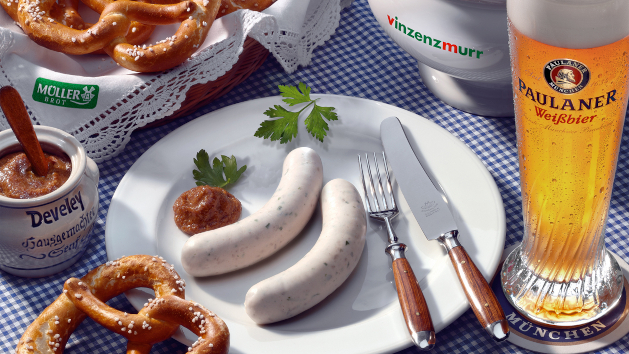 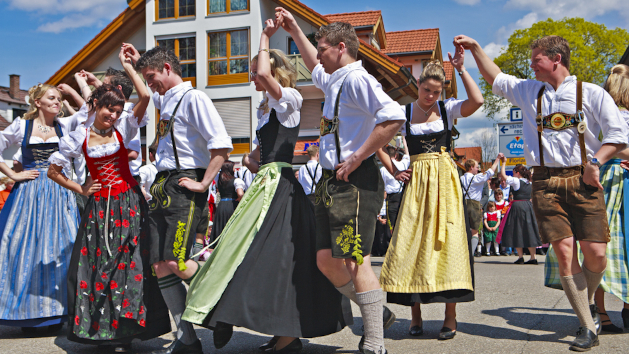 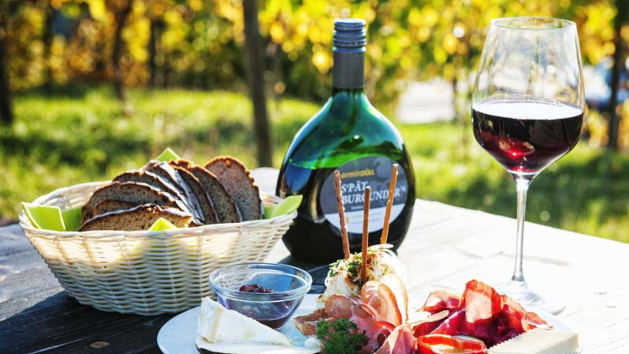 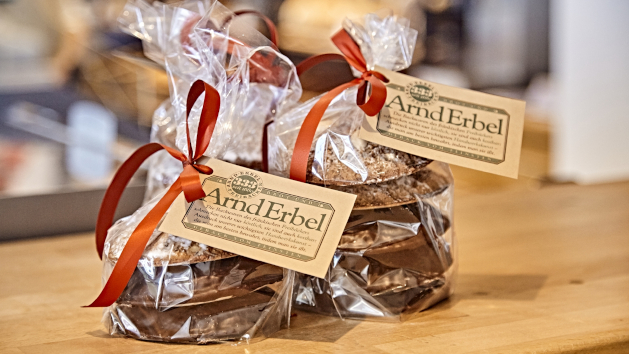 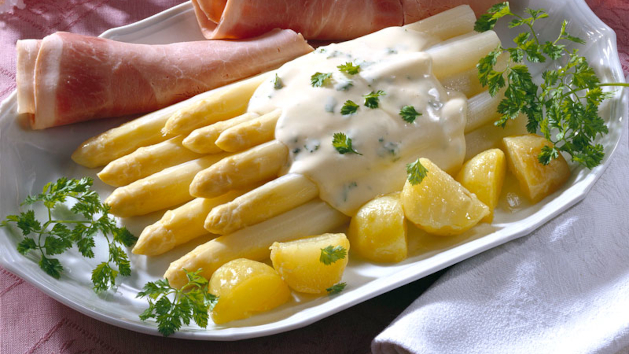 Hardly any other region unites economic strength with agricultural attractiveness like Bavaria does. Numerous lakes – such as Chiemsee, Lake Starnberg, Großer Alpsee, Tegernsee and Staffelsee – contribute to the state’s recreational opportunities, as do the striking mountains, among them: Zugspitze, Bavaria’s best known and Germany’s highest mountain. More than five million people are drawn in by some 45 state-owned palaces, castles and residences every year – with the world–famous edifices of King Ludwig II topping the list. 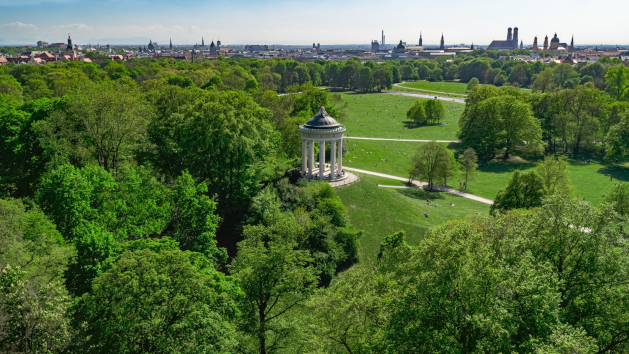 The English Garden
The English Garden is the largest city park in Germany, and with an area of 4,17 km2, one of the world’s largest public urban parks: New York’s Central Park, for example, has an area of 3,4 km2, while Montreal’s Mont-Royal spreads over 2,14 km2. 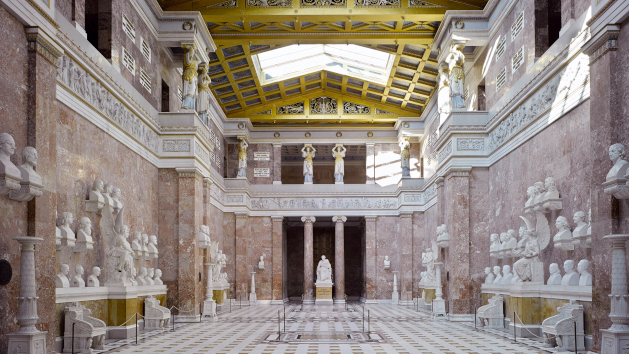 The Walhalla
The Walhalla is one of Germany’s most important halls of honour. It is located in Donaustauf, 20 km downriver from Regensburg. 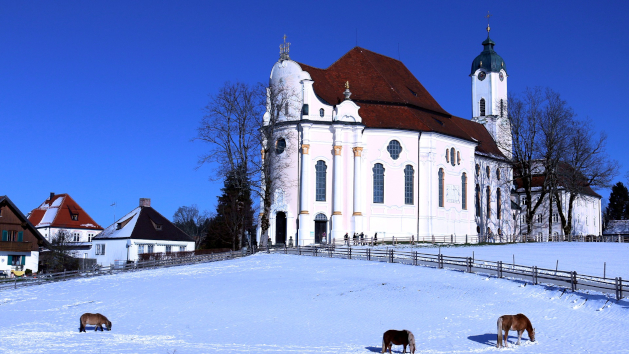 The "church on the prairie" (Wieskirche)
No other architectural style has shaped Bavaria more than the Baroque movement – and its playful version, the Rococo. Numerous monasteries and pilgrimage churches were built during this era. Among those is the “Wies”, a pilgrimage church built near Steingaden, at the foot of the Upper Bavarian Alps, between 1745 and 1754. 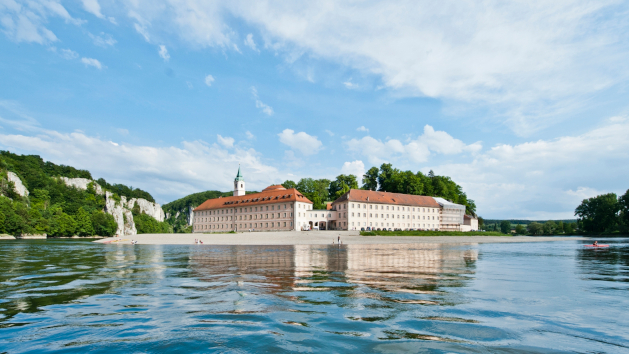 The Weltenburg Abbey
The Weltenburg abbey, located at the geographical heart of Bavaria between Ingolstadt and Regensburg, directly along the Danube River, is Bavaria’s most ancient monastery. 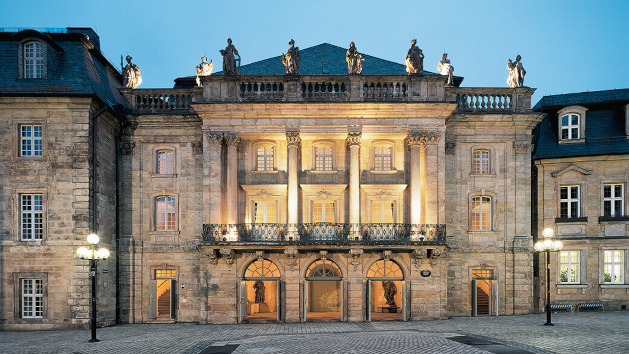 The Margraves' Opera House in Bayreuth
Built between 1746 and 1750, this baroque jewel was commissioned by the Margraves couple Friedrich and Wilhelmine von Brandenburg-Kulmbach, to then Europe-wide acclaimed theater architect Giuseppe Galli Bibiena and his son Carlo. 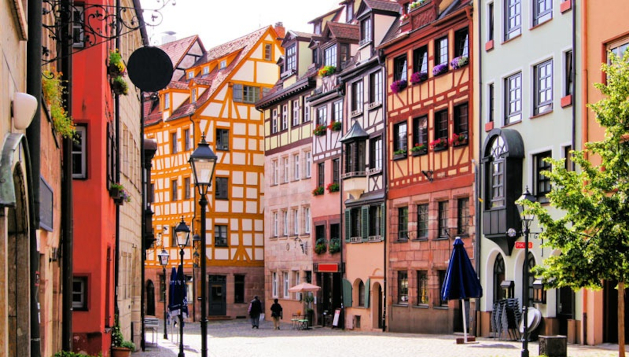 Nuremberg
Bavaria’s second largest city Nuremberg was first mentioned in documents in 1050. Bearing witness to the Holy Roman Empire in the Middle Ages, the Romanesque imperial castle, Nuremberg’s landmark, was built in the 12th century and belongs to the most impressive fortifications in Europe. 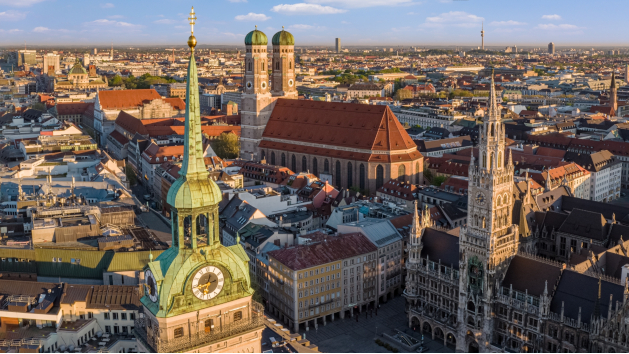 Munich
Discover Bavaria's capital! The city’s name is derived from “Munichen”, meaning “by the monks' place” in Old German, which explains the little monk on the Munich coat of arms. Over time the monk became the Munich Child (Münchner Kindl)... and the city’s symbol. 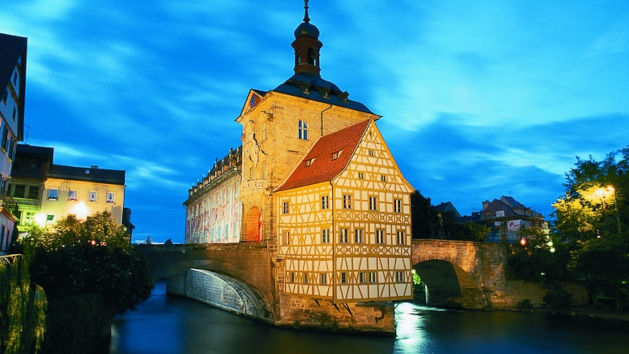 Bamberg
The city on 7 hills shelters one of Europe’s widest ancient, still standing old city centers, which earned Bamberg the privilege of being listed as a UNESCO world heritage. 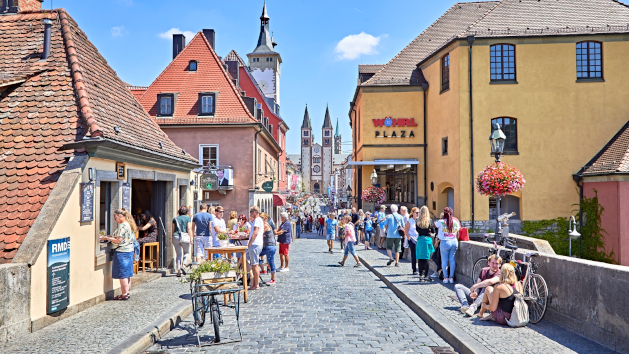 Wurtzburg
Lower Franconia’s capital is one of Germany’s oldest cities: in 2004, Wurtzburg celebrated its 1300th anniversary. The Fortress Marienberg is the city’s most famous landmark and its oldest parts date back to the year 704. 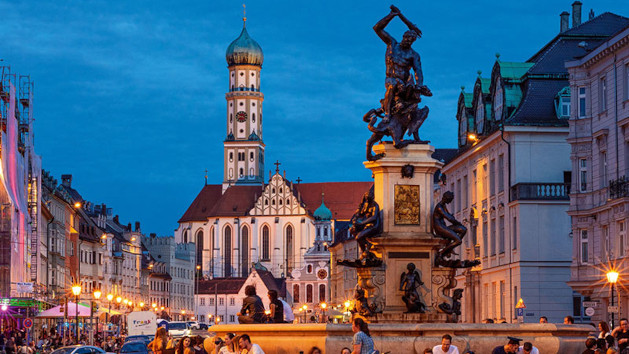 Augburg
Augsburg, counting 270,000 residents, is Bavaria's third-biggest and second-oldest city, as well as the capital of Swabia. Augsburg's golden age was during the Renaissance, as it was one of Europe's most prominent centers of commerce. 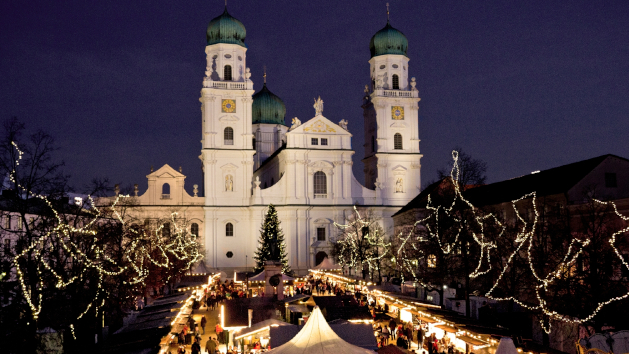 Passau
At the junction of the rivers Donau, Inn and Ilz, Passau, with its narrow and steep streets and the historic buildings of its city center, displays a peculiar and delightful appeal. 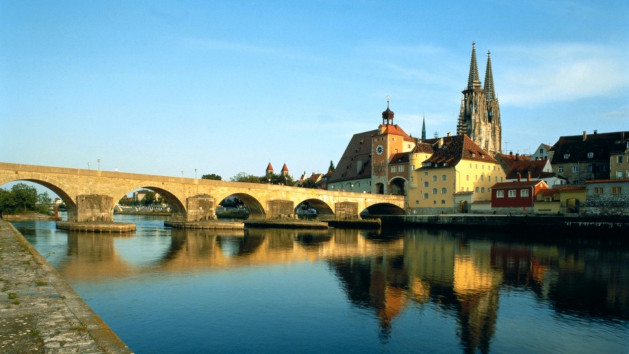 Regensburg
During the 12th and 13th century, its long-distance trading made Regensburg one of the most populated and most prosperous cities. The Gothic and Romance architecture left their marks on the old town’s appearance and still give it its very unique flair.

The State of Bavaria provides more than 500 million euros in annual funding for cultural programming. And it pays off: more than 20 million guests visit some 1,150 collections and museums every year. There are 200 active theatres, opera houses, and musical theatres among the cultural offerings. The numerous cultural festivals featuring outstanding theatrical and musical performances, some spanning several weeks, set international accents and make the past come to life. 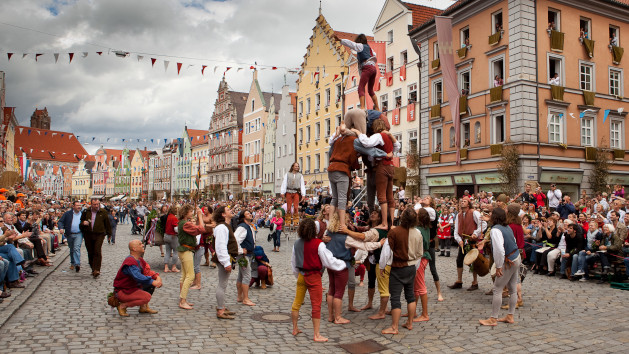 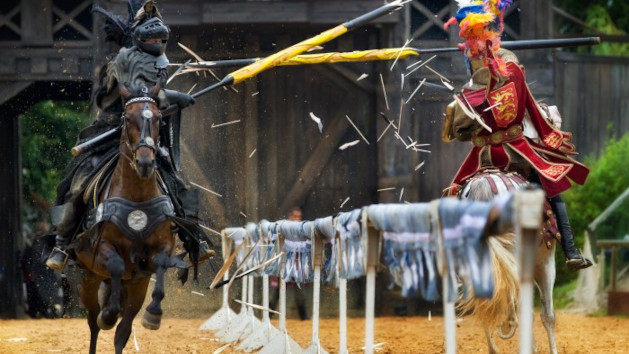 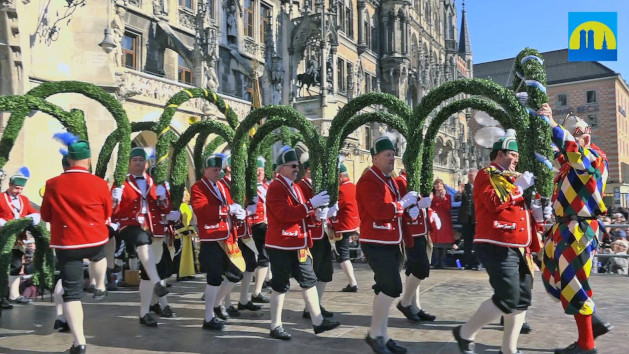 The Barrel Makers’ dance
Only once every 7 years 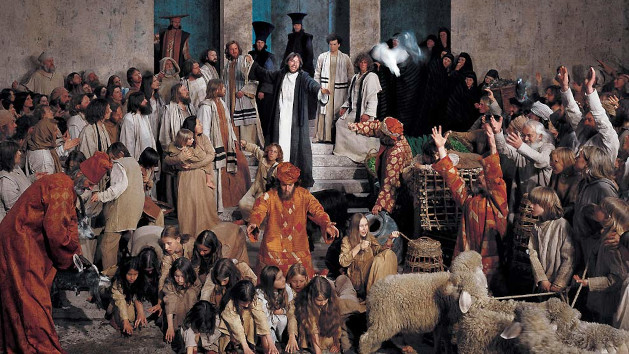 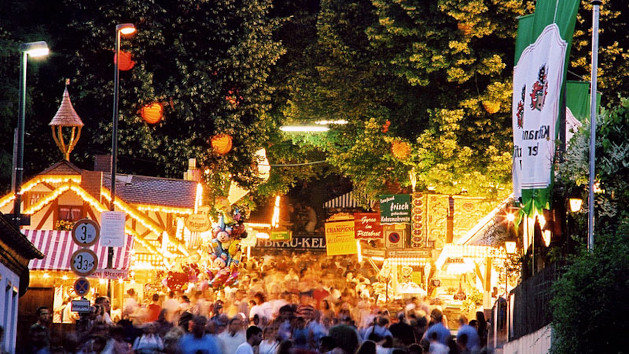 The Bergkirchweih in Erlangen
The other Oktoberfest 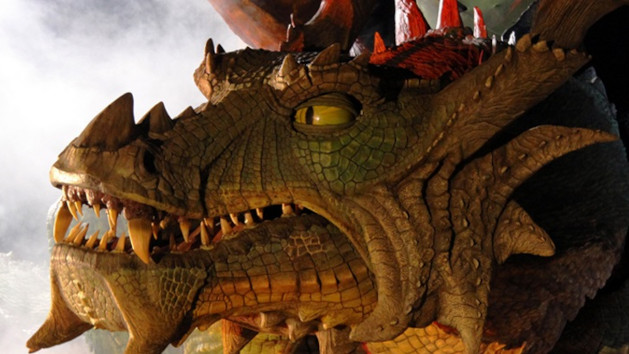 Spearing the Dragon in Furth im Wald
A hightech monster, inspired by Middle-Ages 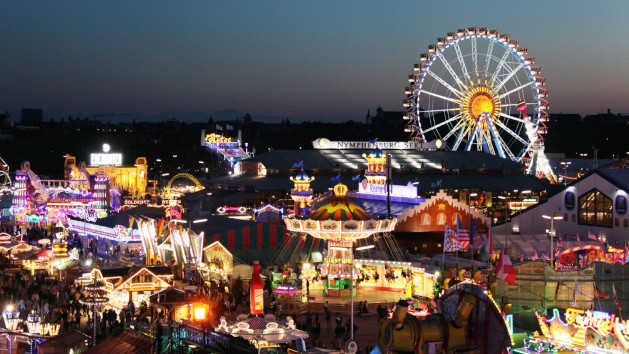 The Munich Oktoberfest
One of the world’s largest fairs 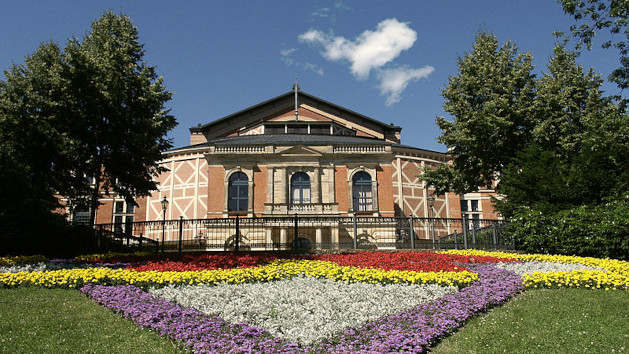